Should she or shouldn't she?

A friend and hockey teammate posted a link to a workshop where, if one attends, one can learn the steps to Michael Jackson's "Thriller." The idea is simple: they want 40 people to dress up as zombies and be part of a flash mob on Halloween in the town next door to mine.

Halloween falls on a Saturday this year, and while a part of me would like to do this, another part of me knows i'm probably too cack-handed to learn so many steps in only one workshop. I was reminded of this when I saw this on more than one friend's facebook wall:

Email ThisBlogThis!Share to TwitterShare to FacebookShare to Pinterest
Labels: dancer she is not

Over this past weekend, Himself and I did a bit of yardwork. Saturday's weather was a bit unsettled, so we did mostly inside tasks and picked up items we'd need like paint and planking for the deck. Saturday afternoon was a bit clearer, and Himself taught me how to replace the deck planks. Two of them had me especially concerned, and one of them broke apart rather easily when Himself was sawing them into shorter pieces, so i'm glad we changed them out when we did.

Sunday, while Himself painted the trim on the back of the house, I downrigged the boat. He got the painting done and helped me take off the mast. I had planned on doing it first thing that morning, but a heavy frost was slow to leave the boat as it was parked on the shady side of the driveway, and was quite slippery.

While I was up on the boat ready to lift the mast and lower down to Himself, I noticed some bits of white dust hitting me. It took me a moment to realize it was snow.

I am not ready for snow yet. It didn't stick, thank goodness, and the flurry was brief, but still, we've only just got autumn well and truly underway.

The thermometer outside registers 40°F (just under 4.5°C), but it feels much colder than that. While the painting will most likely need to be done next year as it didn't have time to cure before the cold, it'll at least offer some protection from winter, which seems to be knocking early this year.
Posted by megan blogs at 17:25 7 comments: Links to this post

We've had a drier than usual summer, which has made it perfect for apples. There are any number of apple trees about, and I saw a woman scrumping the day I was taking my boat out of the water for the season.

There were three apples trees in the back yard when I first arrived. One has since fallen down due to advanced age and my neglect, and the youngest of the three trees didn't fruit until this year. I think I should scrump in my own back yard. One of the women in my knitting group has an old pear tree on her property and while she doesn't like the texture of pears, she did say the ones she sampled this year from the tree are quite marvellous. We had oodles of rain about 2 weeks ago (we had just short of 7 inches/18 cm in 24 hours, farther north just shy of 10 inches/25 cm), which brought down most of the pears, but I can pick some if I like.

Over the weekend, I decided I needed to put my sorry effort of a garden to bed. I pulled up the dried tomato plants easily enough and stowed their cages, but as I watched a bumble bee collecting nectar from the marigolds that are still busily blooming, I found myself unable to pull everything out. I have one small pumpkin that seems to have cured all right, so I plucked it and the shriveled vine. I have two very small squash that will likely not grow very much more, but we may not get frost for another week yet, so I've left them as they enjoy the last hurrah.

I've also clearly marked where the asparagus came up this year so if I decide to interplant among the asparagus next year, I know where I need to steer clear.

I ordered witch hazel twigs very late in the season at an online place when local places didn't have the variety I wanted. I ordered the bundle of five, hoping at least three would make it. They sent me seven, two of which were quite small. I planted all with great hopes; three leafed out, Himself whacked one of the twigs, the other went missing a few days later, and a third leafless twig went missing a few weeks ago. I doubt the only leafless one is still alive, and yet I don't want to pull it out. Silly, I know.

An herbalist who has a lovely shop nearby has expressed interest in taking the two young slippery elms growing quite close to the mother tree. I espied a third a bit farther away when I was doing yard work this past weekend, and shall offer that one to her as well.

I didn't have enough tomatoes to put any up, although I enjoyed the small harvest fresh. I ate the raspberries as they ripened, and while they are putting out fruits for the second blooming (they are the everbearing kind that bloom once in July and a second time in October), I doubt they'll ripen before frost.

There's one remaining sunflower whose stalk is still green; all of them volunteers from seed spilt by birds at the feeder. The finches enjoyed feasting on the sunflowers, and Jo often hunted below.

There are several late blooms on the roses as well as the phlox, and a lazy susan has bloomed this week as well. There's something about the late bloomers that make me smile, and I somehow appreciate them more.

I've also left the kale in the garden. Despite the slugs eating them a couple times, they are sprouting leaves and once the frost kills the slugs, I may just get to enjoy some of the leafy goodness myself.

The leaves are nearing their peak colour this week. I took a photo of the back yard, but it didn't come out very well, so i'll post this picture a friend took in the next town over. 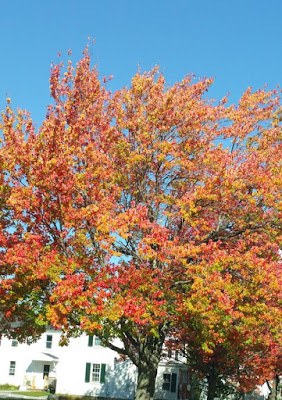 Posted by megan blogs at 21:37 2 comments: Links to this post